Edan confessed to peeking inside the box of Christmas presents that was in our bedroom. We were at the table having lunch when he burst out into tears and said, “I looked inside the box,” sobbing between each word. The box contained the kids’ toys and other gifts for people. Edan knew the contents of the box were supposed to be a secret because I had not wrapped anything yet.

When Edric and I realized he was making a public confession , Edric took him to a separate room to talk so he would not be embarrassed.

When they came back to the table, I asked Edan what he did. He said that he and Tiana (our 1 year old) were in our bedroom. Tiana was playing with the flaps of the box and left them open. When Edan saw that the box was slightly open, he peeked inside and saw some of the toys he and his brothers were going to get for Christmas. When I asked him why he cried, he said, “I thought that I was going to get a spanking.”

I said, “You told the truth and I am proud of you for being honest even if you were afraid.” Edric had apparently told him the same thing in private. And I added, “It’s just too bad that you know what you are going to get and you won’t be surprised.”

Edan asked for forgiveness and of course all was forgiven. His troubled spirit was replaced by peace.

But I was curious about something –his motivation for being truthful. I asked him, “Why did you tell the truth if you knew you might get a spanking?” I wondered why Edan, as a five year old, was willing to risk painful discipline for the sake of integrity.

He replied, “I knew that I should tell the truth.”

“But why should you tell the truth?” I prodded.

“Because it is the right thing to do.” He answered.

I pushed further and asked, “Why is it the right thing to do?”

“Because it makes Jesus happy,” he said with all sincerity.

I paused for a bit to gain composure because I was so blessed by his heart. I was hoping he would say that.

This was one of those treasured moments for me as a mom. I got a glimpse of Edan’s Christianity — his genuine desire to do what is pleasing to God, not out of coercion or pressure but because he has a personal relationship with him.

My kids are still young but I pray that as they begin well they will follow through to the end. May the Lord keep their consciences tender and sensitive to righteousness, and may they live with integrity even if it is costly! 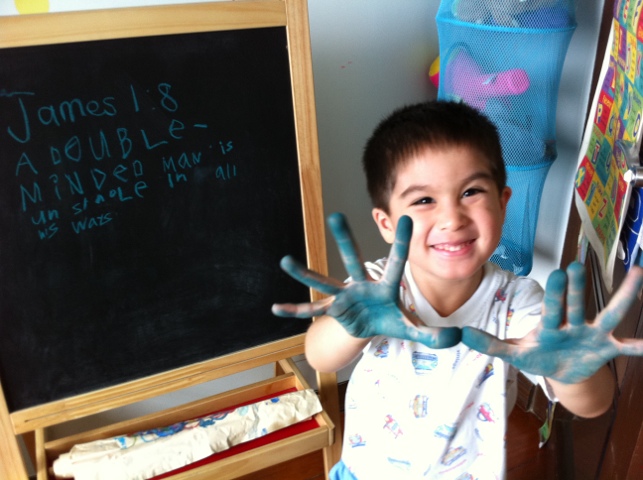