Several weeks ago, I really felt lost as a mom. One of my sons was difficult to handle, emotionally speaking. I found myself clueless about how to discipline and instruct him.

During a photo shoot for a magazine spread, he was the only one of my kids that didn’t want to smile. Everyone else was cooperative except for him.

I had to give him a pep talk and call in Edric for some major reinforcement! And even after that he was so reluctant. Inside I was fuming! I wanted to force him to do it just for the principle of teaching him to do hard things, to learn to adapt to circumstances and respond positively. But boy was it a challenge! I took him to the bathroom to put his outfit on and said, “You need to change your attitude. You cannot behave this way. It is not right.”

It was like talking to a brick wall. He kept pouting and acting like he was on the verge of tears. I began to think that the shoot had been a bad idea. In twenty minutes of trying to convince him, I tried every tactic (good and bad) — bribery, prayer, threats, sternness, and a motivational talk. I felt a range of feelings — embarrassment, irritation, annoyance, resignation…

Finally, I had to come up with a creative story about overcoming difficulty that actually worked. I also let him hold on to two lose pool tiles (miniature ones) that he kept in his pocket. He would reach into his pocket and feel them while the photographer was taking pictures of him, and he would smile! I suppose they offered him a measure of security.

Yet the whole time I was thinking, “Why does this have to be so hard?! Why do I have to do this?! Why can’t he just happily obey?! What am I doing wrong as a parent?! Why are we letting our kids do this shoot? Argh!!!”

It was lunch time at home and this same son of mine did not want to eat his vegetables. He gagged and threw up his lunch. (He has done this several times in the past.) So I took off his clothes to have them washed and said, “Mom is going to teach you to eat vegetables. You can throw up again but you will learn to eat vegetables.”

As a preventive measure, I let him stand in the kitchen without his clothes on (which he did not like) and let him eat standing up (which he also did not like) just in case he threw up again. And sure enough, after a few bites of the leafy greens he dreaded so much, he threw up a second time!

I said, “You are going to clean up your vomit and then I am going to feed you your vegetables again. You need to know that every time you throw up your vegetables, someone has to clean it up. And this time that someone is going to be you.” (Can you imagine the heartlessness?!) My three year old son was naked, on his knees, wiping up vomit!

He started to cry but I did not relent. I even added, “Do you know that when mommy was your age and didn’t like my vegetables, your grandma and grandpa would still make me eat them. Your Aunty Carolyn would vomit and still have to eat her vegetables!” (Did this matter to my 3 year old? No!)

He was completely miserable! Whatever I was saying was going in one ear and out the other. Finally, I asked my househelp to come and help him.

To make a long story short, my son threw up his food two more times after that! It was so aggravating but at the same time, I thought…this does not seem normal. Maybe he really is not feeling well. Had I done the right thing by being so tough about his vegetable issue? After all, it was just vegetables!

Soon after this incident, I discovered to my shame that my sweet little boy was actually fighting a virus that made him nauseous and experience loss of appetite. Boy did I feel like a monster mom!

What did I learn through all of this?

First, my responses to him exposed the nature of my heart. God reminded me that apart from Jesus there is nothing good in me. Paul the apostle said, “For I know that nothing good dwells in me, that is, in my flesh; for the willing is present in me, but the doing of the good is not. For the good that I want, I do not do, but I practice the very evil that I do not want.”(Romans 7:18, 19, NASB) The reality is if I am not intimate with the Lord or filled with the Holy Spirit, I am a monster mom. I need to be a Christ-filled parent.

Second, I spent some time trying to understand my son, trying to study his behaviour and his “triggers.” Here are the things I discovered about him:

The return of monster to mom came when I went to the Lord in desperation and said, “Please forgive me for being impatient. Lord, please teach me how to better parent my son.” I asked for wisdom, guidance, greater capacity, patience, enablement. Honestly, parenting makes me feel so inadequate. But God keeps reminding me that I need to control only what I can and surrender my son (all of my children) to him. What can I control? My walk with the Lord, intimacy with him, my emotions and responses, and my parenting style. 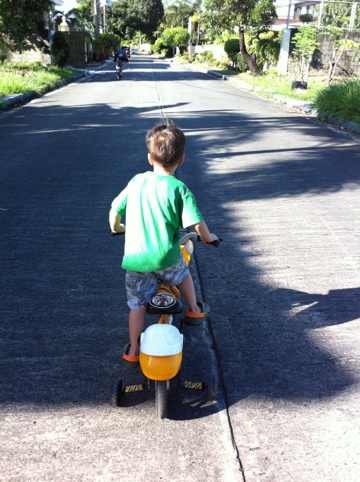