The craziest thing happened to Edric and I and my older brother, Peter, this evening. We left a meeting at Shangrila Edsa and skipped out on dinner there to be with our kids who were all staying at my parents’ house. On the way towards the car, we passed by SM Megamall to pick up some food. Actually, we ordered a bunch of things starting with the grocery area in the ground floor where Edric bought a Shwarma and hotdog, then on towards the basement where we went to get Inasal chicken. Peter got barbecue, too. Both restaurants were practically side by side. While we we waiting for these orders, we dropped by The Sandwhich Guy and got some potatoes and a sandwich. It was like a progressive take-out dinner.

However, about ten minutes later, people started screaming and running in the direction of building A. At first we thought it was a celebrity sighting so we just sat there calmly, chatting away. But Edric and Peter noticed that there was a look of panic in people’s eyes that was disconcerting. Why were they all running? What were they running away from? And even more bizarre, why were all the stores and restaurants locking down their doors? Hey, what about our food?!

Okay, so we thought maybe it was a fire. Nobody seemed to know the real cause of all the panic. Someone said gunman, another said gibberish, the guards looked clueless. We didn’t want to leave the food we had ordered so Edric and Peter knocked on the doors of the restaurants we bought food from and asked them for our chicken meal and barbecue. Once we got that, we were all set. We started to make our way towards the exit facing Bank Drive. People were still running from something. I was eating my potatoes because I was hungry. And I didn’t want to run while eating potatoes.

As we passed by each store, people were peering out the glass windows or hiding inside. Hmm…so very odd. There was obviously something very wrong. When we got to the food court area, there was more screaming and frantic running. At this point, Edric and Peter did get a little bit concerned. All the escalators had been shut down. It was lock-down mode and the entire Megamall was being evacuated, except for those who were stuck inside the stores and restaurants. They were not allowed to leave.

Fortunately, we made it to the stairs going up to National Bookstore at the ground level. As we were making our way up, Edric prayed for protection and safety from whatever was happening. The ground floor was unusually empty! One or two people were exiting the building with us and there was a SWAT team at the entrance, armed and ready for action. We were told to make our way out and we saw an entire block full of people who were staring at the building, anticipating some sort of action. No one was allowed to enter the mall and there was a perimeter that was established to keep people away from the entrance.

Well this was exciting. What on earth?! I was so glad we got out and back to our children safely. We found on later on that there had been a gang robbery at the department store. Shots were fired but no one was hurt. The robbery happened just minutes after we bought our food at the grocery, on the same floor, in the SM department store adjacent to it. Had we been just a few minutes delayed, we might have been part of the mass panic that ensued. Instead, we were sitting down in the basement at The Sandwich Guy with no clue…Edric eating his grilled cheese and me with my potatoes, and both of us drinking Mountain Dew (Nice…that actually rhymes!).

God spared us from all the drama by keeping us unaware of the details until we were safely in the car, going down Edsa. Edric checked out the twitter feeds about it from those who had seen more of the action and those who were trapped inside the stores.

Sitting in the car, the three of us talked about how it was such a blessing that my sister-in-law, Jennifer, had not been with us. Peter and his wife just moved here from New York and she admitted that she would have freaked out if she had been in the mall when it all happened. She left the mall ten minutes before all the chaos.

My realization: It doesn’t matter where you live or where you are. There is no safe place apart from being in the center of God’s will. And our only security and protection is the Lord. Nothing happens apart from his election and he is in absolute control.

I praise God no civilians were hurt, and I praise God for keeping us safe tonight and everyday that he does!

For He will give His angels charge concerning you, to guard you in all your ways. (Psalms 91:11 NASB)

Rappler’s Report on the Megamall Shooting 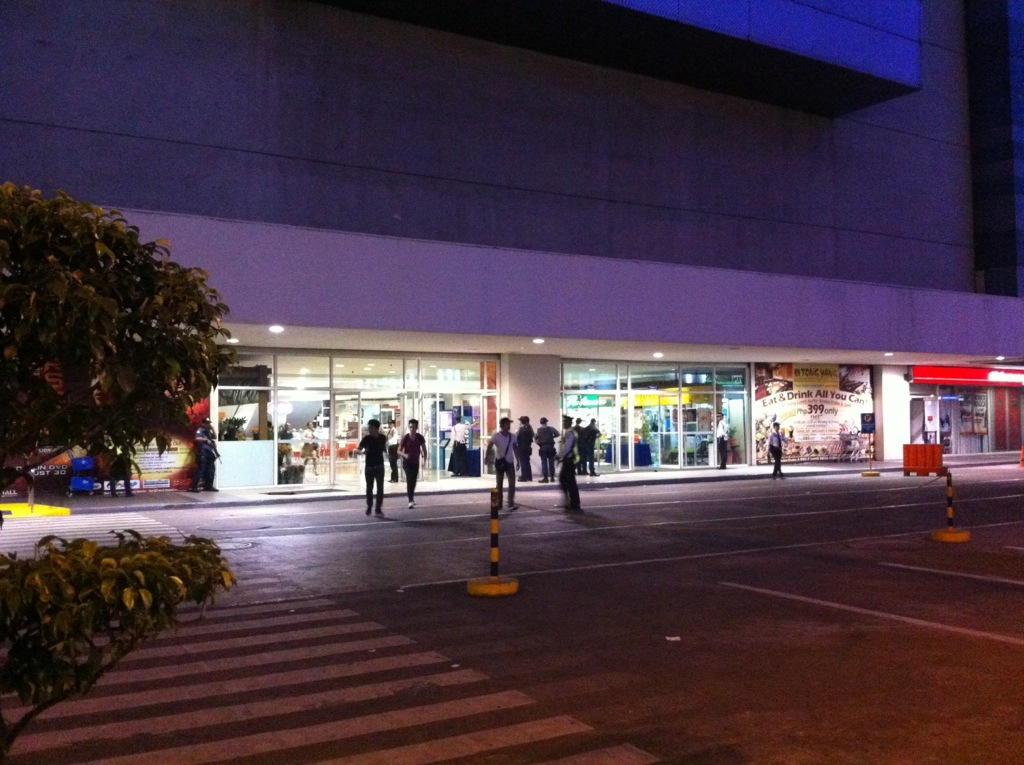 SM Megamall entrance after we exited. If you look closely, you will see the SWAT dudes stationed near the doors.

6 thoughts on “Saved From Megamall Mayhem!”