Elijah, my eldest, turned 9 yesterday. As I watched him eat his breakfast, I thought to myself, my son is moving further and further away from childhood. He is becoming a young man. He is, isn’t he? Wait! That’s fast!

Why did my heart ache as I thought of this? Mingled into the happy occasion of celebrating his life, I was plagued by the reality of how quickly time passes. A deep sense of longing came over me as I remembered days that I can never have again. And my oh my, he is only 9! What shall become of me when he turns 13, 18, 21? Maybe this feels like a big deal because he is my eldest.

Elijah matured in so many ways this past year. During recent conversations with him, it felt like I was no longer talking to a boy but someone transitioning to manhood. In fact, when I asked him what he wanted for his birthday, his sincere reply was, “I would like to give presents to Edan, Titus and Tiana, and my cousins.” Do 9 year olds think this way? I am not sure because this is unchartered territory for me. All my other children are like 6 and below.

I had several reflections after Elijah’s birthday…

First, while it delights me to know that Elijah is growing up well, I need to keep parenting on my knees. There is just no way to raise children without being dependent on God for wisdom, guidance, principles, and success. As Elijah develops his own opinions, judgments, and perspectives on life, I need to pray hard that he will be a man after God’s heart. He is a dear, kind, godly, appreciative, intelligent, and wise son. But one day, he will fly out of this nest. That will be the real test. Will he be ready?

Second, I am also coming to the very obvious conclusion that we can’t repeat the yesterdays we have with our children. Am I full present, available and grateful for each stage, even the difficult ones?

One stage I didn’t enjoy when Elijah was a baby was breastfeeding in the middle of the night. When Elijah was one, he was still feeding during the day and several times at night. It was maddening for me — a person who absolutely needed eight hours of uninterrupted sleep to function normally. Waking up in the middle of the night in response to his cries turned me into a breastfeeding zombie. No one told me that sleep training should be done at 3 months.

When Edric and I finally had this brilliant idea to sleep train Elijah it was impossible. At the time, he was a walking one year old and sleeping on the floor beside our bed. (Yes, on the floor on some kind of make-shift mattress because we had no space for a crib and we couldn’t really afford one back then). Edric and I had agreed to try to let him cry out his night time feeding. So we let him cry, and cry, and cry. It must have been about forty five minutes and we felt like horrible parents. But we wanted to persevere in the hopes that maybe he would get it. Elijah tried to climb on to our bed but he was too little to do so. Instead, he went from one side to the other hoping for a response. But we refused to pick him up. In fact, we just lay there very still to make it seem like we were asleep. He finally gave up from sheer exhaustion and fell asleep standing up at the end of the bed…hugging my foot! His arms were stretched out to hold on to my foot just to be near me. After that, Edric and I decided that it really was too late to sleep train him. We would just have to do better with our subsequent children.

I let Elijah wake up intermittently every night until he was about two years old. I must have aged ten years from all the sleepless nights. And yet, looking back, I miss that stage. I will never have it again. Elijah can no longer be that one year old baby, or two, three, four, five, six, seven, eight. Whatever year God gives me to be present in the lives of my children, I pray I can give motherhood my 100%. Like my parents often say, we only get one shot at parenting.

Lastly, God reminded me to rest in his provision for my kids. We didn’t have a party for Elijah this year. (If I planned big parties for each of my kids every single year that would be my full-time job and Edric would go broke!) But I did put together some games and activities for our kids and their cousins.

During the early evening, my mom, sister in law, Jenny, and sister, Carolyn, took the kids to the park. A party had just ended and the organizers were throwing away the balloon sculptures. My mom decided to ask if the kids could have the balloons. They said, yes. So my kids and my nephews and nieces walked back home looking like they were part of a float in a parade.

What did I love about this experience? God provided our decor! Balloons may sound like a trivial thing, but they represented how personally involved God is in our lives and our children’s. I had physically blown a pitiful set of balloons earlier in the afternoon. Elijah was so positive and grateful. He even helped me blow some of them. But God provided the coolest decor.

It was the best way to end Elijah’s birthday. Just a few days prior Elijah had wondered how he could feel God’s love in the same way that he feels our love as his parents. Last night, I told him, “God loves you so much, Elijah. He wanted you to know that he was thinking of you.” Elijah smiled from ear to ear.

Dear God, you didn’t have to but thank you for the birthday balloons! 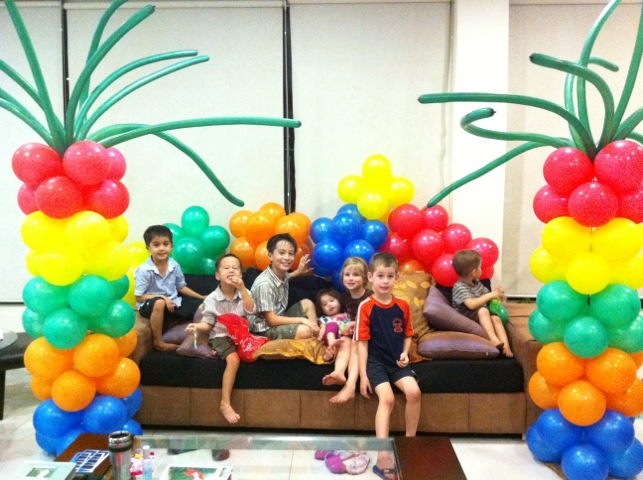 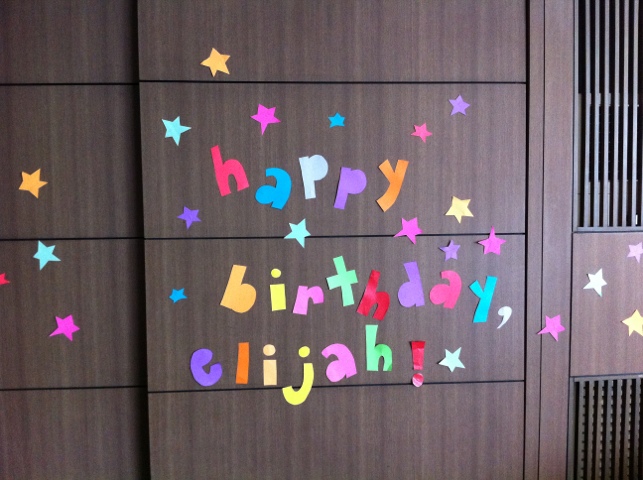 16 thoughts on “Birthday Balloons from God”