Years ago, I read a book that changed my perspective on education. It was William J. Bennett’s work, The Educated Child.

From time to time I will read aloud from these books to my children. Tonight, I read an excerpt on the life of Beethoven from The Moral Compass. 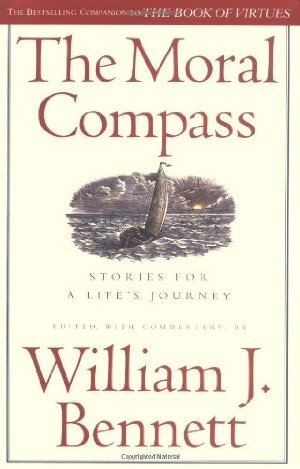 Here’s what I have always admired about Beethoven. He was a crazy genius, so passionate about music that he composed some of his most amazing works when he was going deaf. One of his last, most incredible compositions was his Ninth Symphony, “Ode to Joy.” The irony is that he felt very much alone and depressed about losing his sense of hearing. Yet his love for music and his faith in God unshackled him from the constraints of his deafening silence. How was it really possible for a deaf person to still compose music of the highest acclamation?

When I read the excerpt to my children, I was compelled by Beethoven’s determination to defy his handicap amidst the very real pain and loss of what he enjoyed most. He did not let circumstances deter him. Perhaps it was this great and irremovable tension between painful reality and a consuming passion to still be what was illogical for him to be that birthed such beautiful music. His life reminds me of a line in a movie Edric and I watched some time ago. In Five Days of August, a soldier approaches one of the main characters to comfort her and says, “I have come to believe that tragedy leads you to your purpose.” This is what happened in Beethoven’s life. God allowed tragedy to turn his music into brilliance.

The excerpt from The Moral Compass reads, “I could not bring myself to say to people, ‘Speak louder, shout, for I am deaf.’” He (Beethoven) wrote, “How should I bring myself to admit the weakness of the sense which ought to be more perfect in me than in others, a sense which I once possessed in the greatest perfect?”…And yet Beethoven did something much more courageous than give up. He gave himself to his art. He went on writing music, even though what he wrote grew fainter and fainter in his own ears. As his hearing faded, his music began to take on a quality much different from the elegant compositions written by earlier composers. Many of Beethoven’s works grew stormy and emotional and thrilling – much like his own courageous and turbulent life. Strange and wonderful to say, he wrote much of his best music, the music we remember him for, after he lost his ability to hear.

Eventually Beethoven went completely deaf. He was lonely and often unhappy, and yet he managed to compose uplifting music. His last symphony, the Ninth, concludes with the famous Ode to Joy. When the work was complete, Beethoven agreed to conduct an orchestra and choir in a concert in Vienna.

The hall was packed. Beethoven took his place in the center of the orchestra, with his back to the audience, and at a signal from him the music began. The magnificent strains entranced the audience. Yet Beethoven himself heard nothing. He followed the score only in his mind.

When it was over, the great master lowered his arms. He stood amid the silence, fumbling with his score. One of the singers tugged at his sleeve and motioned for him to look. Beethoven turned around.

He saw people on their feet, clapping their hands, waving their hats, throwing their arms into the air. The deaf musician bowed and every eye in the audience held a tear…

This statement put into perspective the hope for which we must live. One day all that is perishable will be changed. As the apostle Paul said, “in a moment, in the twinkling of an eye, at the last trumpet; for the trumpet will sound, and the dead will be raised imperishable, and we will be changed. For this perishable must put on the imperishable, and this mortal must put on immortality.” 1 Corinthians 15 goes on to say that death can no longer sting because of Christ’s victory on the cross. His victory has become our victory. And then the apostle Paul ends the chapter with a challenge to “keep steadfast, immovable, always bounding in the work of the Lord, knowing that your toil is not in vain in the Lord.”

What shall I hear in heaven, Lord? Let me abound in the work you have designated for me — to be a helpmate to Edric, to raise, train, and teach my children for your purposes and glory. And while these things may not be the equivalent of Beethoven’s earthshaking symphonies in the eyes of the world, may the symphony of the life I live merit the applause of the only audience that matters — YOU.

4 thoughts on “I Shall Hear In Heaven”