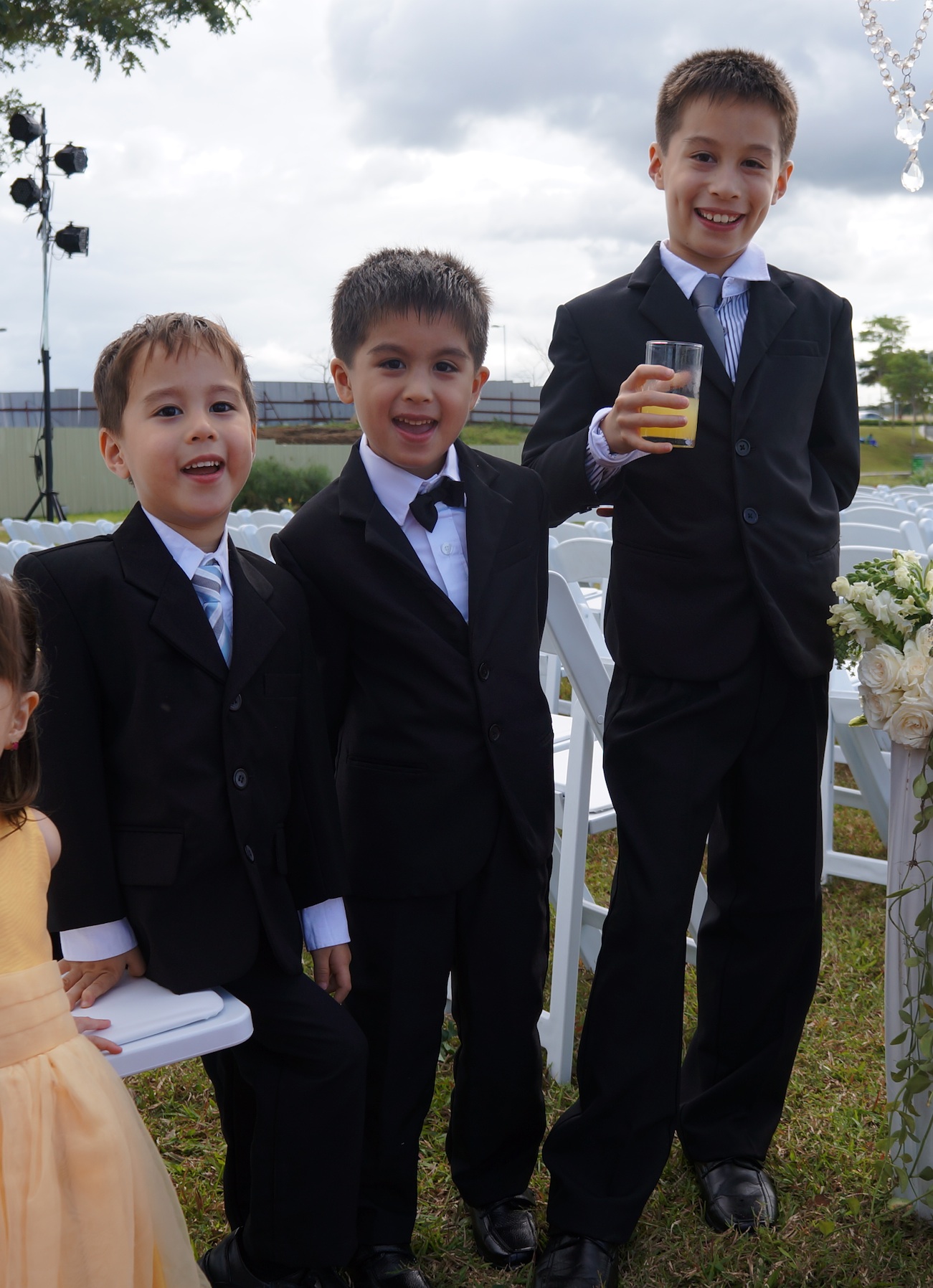 Sometimes raising boys makes me a little crazy…their seeming inability to modulate their voices, the perpetual movement, the mess, the competing and clashing of their titanic personalities…It is like trying to reign in wild horses. Thankfully, they have learned obedience and submission to authority which helps a lot. However, they still push back and want to assert their manhood and ideas very often. And I must be careful not to quell their natural inclinations towards leadership. On occasion, however, I want to say, “I surrender! Edric, please take over! I need to go get my toenails done or do something to get away from all this testosterone!”

The past couple of weeks have been wonderful because Edric had some time off from his ANC tapings and TMA Homeschool. So he spent one-on-one time with each of the boys and he has been 100% hands-on with training them. Last week was like Daddy Boot Camp because we had no house help. (I am not going to do that again. It was novel for a short period but exhausting!)

Edric reigned in our three stallions — Elijah, Edan and Titus. Edric’s authoritative manner got the boys to listen and comply with his rules. They were actually eager to follow a plan, a system, and they had a healthy fear of disregarding Edric’s “policies.” He was stern but not mean.

He had a couple of things that he implemented:

1. No leaving the table without excusing yourself when you are done eating or you stay 10 extra minutes.
2. Clear everything you use from the table and bring it all into the kitchen.
3. Follow the four step rule of taking a shower, brushing your teeth, putting on your pajamas, and then calling dad when you are ready for bedtime prayer.
4. Fold your clothes neatly if they are not dirty.
5. Throw or give away toys that you are not using and store new ones so you have something to look forward to. (In an afternoon, he got the boys to sort through their toys. There was a mountain in the living room but he got them to stack everything neatly so we can now put them into boxes for storage.)

The boys readily submitted to Edric like good soldiers. It certainly made my job of focusing on the home less difficult. And beyond this, he really sought to take the opportunity to mentor them. Elijah needed help with being more focused and responsible about his belongings. Edan needed to be encouraged toward courageousness. Titus had to be refreshed about immediate obedience.

Some days ago, Elijah forgot to excuse himself from the table and Edric made him sit there for 10 extra minutes. Elijah was frustrated because he wanted to run off and play. So he started to tear. A few hours later, he broke his glasses because he left them thoughtlessly on the floor. He really cried when this happened. One of the lenses had popped off and we could not put it back into the frame.

When I reported this to Edric, initially, he felt aggravated and frustrated. He was really tempted to be angry with Elijah for his carelessness. He had a talk with Elijah. Edric didn’t get mad, but he did tell Elijah that he needed to improve on being more focused.

Afterwards, Elijah repeated a similar mistake which again showed that he lacked presence of mind. In private, Edric shared with me his irritation as a father. I shared my own perspective on Elijah. From my observations, Elijah was beginning to feel very discouraged about his lack of focus and clumsiness. But I suggested that he is growing up so fast mentally and physically that perhaps this contributes to his inability to be “all there.” Edric decided to pray about it and give it more thought.

The next day, he called Elijah over the phone and told him, “I experienced being unfocused while I was working today and I remember that I was prone to the same changes when I was your age. I just want to let you know that I understand. Don’t be discouraged. I love you no matter what but I also want you to realize that Daddy is committed to helping you improve and become better.” (I asked for a replay of the dialogue from both of them!)

In response, I saw Elijah’s face soften as he thanked his dad for the encouragement. And he ran off to play a happy boy, confident that his dad was there to offer him grace, support and the mentoring he needed.

As for Edan, our cautious and calculated child, Edric got him to wade out in deeper water at the beach when we visited Las Casas Filipinas de Acuzar this past weekend. Edan was afraid to try but Edric didn’t let him be mastered by his fear. He took him out to where they could jump the waves and after a few minutes, Edan grabbed Edric to embrace him and he said, “Daddy, I really like it when you are with me.” He expressed how fun it was out in the deeper water.

Very recently, Edric told me, “I have been thinking a lot about being a dad and the kind of father I want to be. I don’t want to be a father who is there just for the moments, the celebratory occasions. I want to be present and I want my kids to be able to say, someday, that I was around, that I was there for them.”

When I reflect on what it means to usher our sons into manhood, I think of Edric’s role in the lives of our boys. They come to me when they are hungry, need sympathy, assistance on their homeschooling, or a referee for their disputes, etc. But they have a deep respect for their father. They look at him with a kind of adulation that I don’t get. The boys grow up when he affirms them and gives them his attention. I get puppy dog eyes to butter me up when they want something.

I asked Elijah what he thought of his dad. He said, “100%. He is the best dad in the world!” He also added that when he has one-on-one time with his dad it’s important because “they can talk about men stuff that women don’t understand.”

Parenting is such a challenge, especially raising sons. I know that I would be overwhelmed without Edric around. I often feel that Edric is God’s grace to me…his leadership in our home. He steers the ship that is our family towards the Lord. Seeing him at the helm provides me with a great assurance, not because he always knows what he is doing (he would be the first to admit that he makes mistakes, big and small). What makes me feel secure is his desire and consistency in trying to do what God wants him to, as a husband, as a father. This is better to me than someone who has a facade of perfection and appears to have it all together. His dependence on the Lord for direction and his desire to please him is what real manhood is about.

“Fathers, do not provoke your children to anger, but bring them up in the discipline and instruction of the Lord.” Ephesians 6:4

1 thought on “Ushering Boys into Manhood”