When we go out on dates, Edric and I will try to ask each other, “On a scale of 1 – 10, how would you rate our marriage?” This becomes a starting point to discuss how we can improve and meet one another’s needs. We also do this with the couples that are in our bible study group, asking them to give their spouses a score. If it’s less than 10, we say, “What will make it a 10?” Usually the men give a higher score than the women do so it always leads to interesting but helpful dialogues.

Lately, Edric and I have been so busy we haven’t had any quality dates. And I told him on several occasions that he had too much going on. He acknowledged this but there was already a momentum to everything that was happening and he had to ride the wave of activity to close the year.

By yesterday morning, however, I was tired of feeling de-prioritized. So when he asked me in passing, How’s our marriage, 1 – 10? I said it was a ZERO. I’ve never said that. But I was really sad about the state of our relationship. I felt like we were drifting apart. We needed to address the issues that were polarizing us.

Since Edric’s calendar had been packed with speaking engagements in and out of town with Elijah, his ANC tapings, TMA Homeschool activities, house building meetings and ministry commitments there was no time to talk.

When we did encounter one another, there was tension between us because he was harried and always had something more urgent to attend to (which annoyed me.) So I decided to withdraw. I didn’t want to be a needy person, a cling-on, a ganglion cyst. My own interests kept me busy. If he wasn’t going to initiate re-connecting I wouldn’t.

After I opened up to him and expressed that I didn’t think we were doing well, that I didn’t think our relationship was healthy, he teased me about being so dramatic. But I was serious. So he assured me that we would find time to talk about it. He just had to finish his events for the day.

We had a Christmas gathering in Antipolo with our bible study group in the afternoon and I went ahead with the kids because Edric was coming from another event. When he finally got to the party he mentioned that we could ride home together to talk since it would take us a while to get home. And, the kids could go home in another vehicle. I was looking forward to being with him.

However, as the evening was drawing to a close, Edric told me that I would go on ahead with the kids because he was planning to play NBA with the men in Pasig. SERIOUSLY?! That was my first thought. I just opened up to you about how things aren’t going well between us and how busy you have been and now that you have some free time you are going to go off and play a computer game?! I was livid. But I didn’t show it because he had mentioned the change in plans in front of a friend.

When we had a moment to interact in private, I said with irritation, “I don’t understand why you have to go off tonight.” And he replied, “Is this an issue, because we can make it an issue.” Well, that was it. WAR. My warfare is not the shouting, fighting kind. I am a quiet slayer.

At 8:00, I went home and Edric went off with the guys. In the van, with the children, I acted like everything was fine. I didn’t want to bring the kids into the conflict between Edric and I. In fact, when Elijah mentioned, “So Dad is not going home with us?” I didn’t make a big deal out of it. I said something like, “Yup, he is going to hang out with the men.”

At home, by myself, was another story. I put Catalina into her crib and I sat down on the bed to get in a little bit of writing. I started to cry. Usually, I wouldn’t have made a big deal out of him going out. The guys are “safe.” They hang out to play NBA once in a while. It’s harmless. It’s clean fun. Plus, they are our good friends.

He is changing. He doesn’t care about my feelings. He would rather be with the guys than with me. He’s becoming so selfish, leaving us to go home so he can run off and have fun with his friends. If I went off to hang out with my girl friends and left him to be with the kids he would be upset. And he was acting like I was making an issue out of nothing.

Wow. I’m just going to withdraw and detach myself. Of course, these were prideful thoughts and they were judgmental and wrong.

(LIKE I’VE SAID MANY TIMES, WE DON’T HAVE A PERFECT MARRIAGE! )

This morning, before our church’s service, my strategy was to be as frigid as possible without being disrespectful. I made him a yummy omelet to be dutiful but I didn’t plan to eat it with him. I had breakfast ahead with the kids and left him a plate with his food on it. After getting Catalina ready and making sure everyone else was dressed for Sunday worship, I barely interacted with him. I told myself, I will answer with one-liners and shrugs, keep my voice monotone, barely make eye contact unless absolutely necessary, and not initiate conversation. Embarrassingly juvenile but I was hurt and wounded. There was no motivation to be cheerful and chatty. Of course this behavior was NOT okay.

I said something to the kids. “Look, it’s the Santa house.” (There was a house that looked like its owner was obsessed with Santa Claus. There were like 20 huge Santas hanging everywhere.) I eventually said SOMETHING to Edric but it was quick.

It didn’t take long before Edric noticed that I was behaving very uncharacteristically. When he asked me why, I explained that I felt hurt that he left us to go off and hang out with the guys, especially after I had told him that we really needed to work on our marriage and settle some issues. At first, he wasn’t very sympathetic. He expected me to understand that playing games with the guys was a much needed break for him, from all the work-related stress he had to deal with as of late.

At some point I said, “Well, how would you feel if I went off with my girl friends until 3 AM in the morning and you were at home with the kids? Would that be okay?” He didn’t appreciate this attempt to flip roles around and he walked away. Walked away?!

During worship, he mentioned to me that what I had said was childish. I shouldn’t have retorted but unfortunately, I did. I leaned over to him and disrespectfully said, “Don’t you dare call me childish.” (In my still monotone voice.)

“Are you threatening me?” was his response. Oh my, this was going downhill.

Could I sing worship songs to the Lord after that? Nope. I took Catalina from her yaya and held her as a prop because I needed a distraction.

During the course of the morning, God spoke to me. A man shared about his life’s journey from worldly success that left him empty and suicidal to an abundant life when he came to know Jesus Christ. And I felt wretched at that point for being so full of myself. All of the funk and muck I had been feeling was not due to Edric. I was blaming him and making my happiness dependent on the way he treated me. But my anchor is Jesus Christ. My joy comes from him. My ability to love Edric and my children comes from him.

Amazingly, Edric turned into his sweet self again. He was convicted during the service, too. In the middle of the pastor’s message, he put his arm around me and jokingly teased, “You love me. You know you do…” Of course, he apologized, especially when he realized that he had set me up with an expectation – the expectation of riding home together to talk – and completely abandoned it. He tried to charm me and say all kinds of things to make me smile….“I’m madly in love with you,” he said, “My love makes you mad right?!”

I’m pretty easy. A little attentiveness from Edric mixed in with lots of cheesy phrases makes me respond with enthusiasm. And he knows it. He knows how to charm me. But I’m glad he isn’t just a smooth talker. He really does follow through with what he says when he makes claims like, “I will make it up to you…” “I’m going to change…” And I believe him because I know he loves Jesus and that is the reason why he really means it when he says that he loves me, too.

Having these sorts of conflicts and getting past them is a reminder that marriage isn’t an easy stroll through a park full of sweet smelling flowers. It takes hard work and it has to be held together by Jesus, at the center. Colossians 1: 17 tells us “in HIM all things hold together.” If Jesus wasn’t in our marriage, Edric and I would be stuck at zero to five on the relationship scale. We would be attempting to solve our problems on our own insufficient power. Our effort wouldn’t cut it because apart from Christ, our tendency is towards selfishness. So even if marriage has its lows, because we love Jesus and let his love motivate us and overflow out of us, it can certainly bounce back to a 10!

By God’s grace, we eventually resolved our conflict by discussing the root issues maturely. I also said sorry for my disrespectful comment. And we just came from a date, holding hands, eating Vietnamese noodles and watching a movie. I’m happy to say that after the cold war (on my part at least), our relationship is healthy again. Praise God! 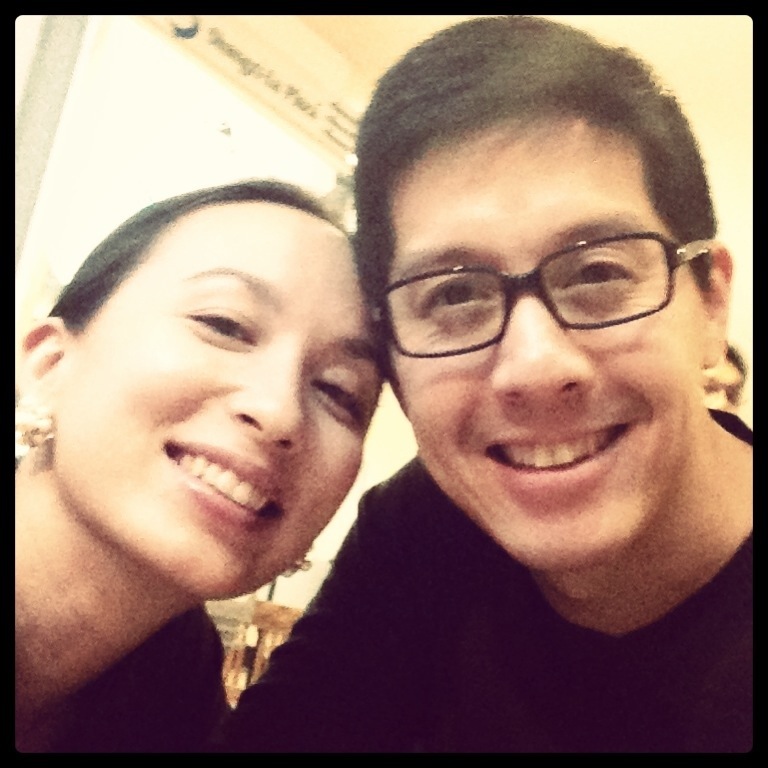