We spent the day moving boxes into our new home and everything was going great until there was a downpour outside. And then the downpour happened inside! The water started coming through the hanging chandelier in the entrance and out of the lights in the hallway on the second floor. It was like a waterfall from the top of our second floor ceiling to the ground floor below. I couldn’t believe it!

Thankfully, the architect assigned to our site (representing the contractor) was around to address the problem. Everyone else on his team was scrambling around looking lost and overwhelmed by the ridiculousness of the situation but eventually, they figured out what to do. Someone got up to the roof and found a piece of wood blocking the downspouts. (How the wood got stuck there in the first place is a mystery.) Others found containers to catch the water and throw it outside. The electrician borrowed my Iphone flashlight so he could go into the ceiling and spot the water’s point of entry.

When it rained this afternoon, the water began to pond and seep into the ceiling. Without any other outlet but the lights in the hallway, the water started to flow downwards. First it came down in trickles and then in a stream. It was almost beautiful seeing the water drop down two stories right in front of our main door. We have a lot of glass in our entry way so it was like a water feature! The only problem of course was this was happening inside. Had our four older children been with us, they would have been splashing around in the water and dancing for joy. My baby, Catalina, was with me and she was very fascinated by the spectacle.

Because it was such a crazy, unexpected disaster, I knew it wasn’t just a freak accident. This was a divine message for Edric and I. We went out onto the balcony and thanked God for reminding us that this world is not our home, and we should not love the things of this world. 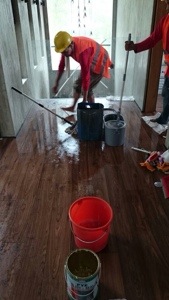 On a positive note, it was a blessing that this mess happened at the hour it did. First, the workers were still at the house to address the issue. Had it happened in the evening, when they had all gone home, we would have been in big trouble! Second, it was a good “test” shower before actual rainy season. We got to see how the house faired against lots of rain. Third, we hadn’t completely moved in yet so we weren’t put in physical jeopardy.

But the best reason of all was I believe God wanted us to share the gospel with the on-site architect. When I saw the water falling through the ceiling I wanted to freak out and blame someone, but God gave Edric and I the calmness to consider that there was a spiritual perspective to be had in all of this.

The architect was so apologetic and promised that his team would clear out the downspouts so it wouldn’t happen again. Of course, he also told us the ceiling and whatever else was affected would be rectified. At this juncture…when we are about to move in, the timing of this rectification is unfortunate, but in the grand scheme of eternity, the damage was “worth it.” Let me explain…

Ever since this architect came on board for the finishing stage of our housebuilding, I have been burdened for him to come to Christ. He is a very nice guy who has worked hard and well to manage the final phase of our house project. Two weeks ago, he told me he saw my feature on GMA, but we didn’t get to talk about it. I asked Edric if he could be the one to process the feature with him since it would be awkward for me to discuss something so personal with a man.

He wasn’t able to do so then because we were headed home but after the indoor downpour happened, it
was the perfect opportunity to tell him about Jesus. When he came up to me to apologize once again, I assured him, “This is a reminder that we should not love this world. This world is not our home, heaven is.” When Edric and I were in private, I was like, “Hon, you should share the gospel with him. This is the best time to do so!” Edric completely agreed and some moments later took the architect aside.

On the balcony, Edric introduced him to Jesus Christ and what it means to have a personal relationship with him. Given that the incident made people in the house consider how temporal the things of this world are, it was a great segue for Edric to get into the topic of eternity. Edric also referred to the Tanikala episode of 700 Club which the architect got to watch. At the end of their dialogue, Edric asked him if he wanted to pray with him to receive Jesus Christ as his Lord and Savior, and he said, “Yes! Gusto ko yan (I want that).”

I was so thrilled. I couldn’t help but take a photo of the two of them. 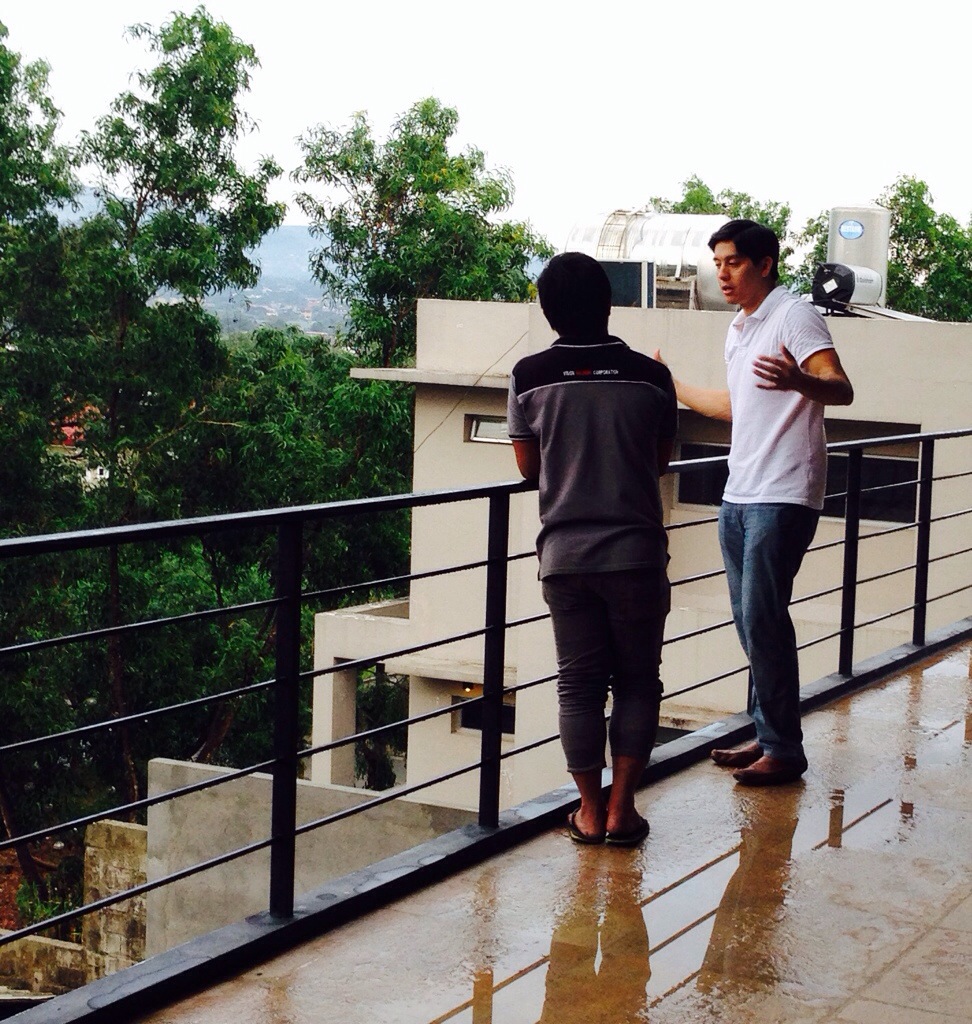 Edric and I have been praying that God will use this house for his glory and his purposes, and that’s what happened today in the most unprecedented sort of way. This is HIS house, not ours.

Even if it meant getting rain inside our house, the ceiling being partially destroyed, our lights and chandelier possibly getting wrecked, and the floor warping because it flooded on the second floor, I was happy. Those things can be repaired and redone. But a soul…what is the price of soul?

God loves all of us so much. He wants to get our attention and make our hearts receptive to the gospel. If it means making rain fall inside a house in a disastrous way so that one person will come to know him, their soul is worth it!

Luke 15:10 “In the same way, there is joy in the presence of God’s angels when even one sinner repents.”

9 thoughts on “When It Rains Inside Your House”