At the beginning of my marriage I struggled in the area of respect. (For those of you who have followed my blog, you have heard me say this a number of times.)

I thought I had married the man of my dreams. He was (still is) but in our marriage, certain realties presented themselves.

Edric had temper issues. I didn’t see this when we were dating. But my father-in-law jokingly told me once, “Edric can be a monster.” I laughed because I thought it was an exaggeration. This couldn’t possibly be true, I thought.

However, a few weeks after we got married I began to see what my father-in-law meant. Edric had a Dr. Jekyll and Mr. Hyde to him. When he was in good spirits he was the most fun person to be with. He was energetic, intense, and passionate. But, when he was uncomfortable due to heat, hunger, fatigue, or stress, he was the binary opposite. If his expectations were not met he tended to be critical. Furthermore, as the only son in his family, he wasn’t used to being flexible with inefficiencies and changes in plans. He admitted that he was used to being treated like a PRINCE. Naturally, in marriage, he graduated to KING and wanted to be treated that way.

I began to entertain thoughts like, “Is this the man I married? Is this how marriage is going to be?”

One of the mistakes I made was I compared Edric to my dad. Even though I didn’t vocalize this, it was like I had a mental chart in my head with two names on it..Edric versus my father. And then I went down the list of “categories” and said things like, “Why can’t Edric be more even-keeled like dad? Why doesn’t he make choices like dad in this area? Why isn’t he a better provider?”

So I made it my mission to help Edric be a better husband and leader. I thought I was doing him a favor by correcting and pinpointing areas for improvement. But this didn’t work. It only lead to more conflict.

Edric would be driving down Edsa and if someone cut him off, he would try to chase the person down and antagonize him. This would deeply annoy me, so I would say things like, “Why do you have to get angry? You shouldn’t do that. That’s not a godly response.”

He would react with greater irritation at my attempts to teach him, and tell me to back off and leave him alone, that it wasn’t the time or place to correct him. According to him, he already knew he was wrong and he didn’t need me to say it.

This sort of scenario and many others repeated themselves over and over so that I developed a resentment toward Edric. I became an expert at rolling my eyeballs, deep sighing, snide remarking, contradicting and arguing, the silent treatment, even withholding sex at times, and a host of other tactics to communicate my disappointment in his leadership and choices.

I even kept journals where I enumerated my frustrations and hoped that he would read them. He didn’t. He had no idea what kinds of ugly feelings inspired me to fill pages and pages of my notebooks. After a while, I worried that if my children or others ever read my journals in the future they would think I had such an awful marriage which wasn’t true. But since I tended to write more when I was upset at Edric, my journals reflected this!

I praise God for couples’ retreats and seminars, the advice of wise women who have gone before me, and for God’s word where I learned and relearned about my role as a wife. I had failed to respect Edric because I thought of it as conditional. My perspective was, If he was deserving I would respect him. And what about me? What about being cherished and treated with respect?

God showed me that I was neck-deep in ugly pride and bitterness, and these hidden sins of my heart were making me a contentious and unpleasant wife. I mistakenly thought I was the better half in our relationship, the one who was more spiritually mature. But I wasn’t! My attitude was turning Edric’s heart away from me and it wasn’t inspiring him to grow spiritually either.

I realized that respect was one of Edric’s needs and desires, and I wasn’t meeting it. More importantly, I was disobeying God’s command to respect Edric as the head of our marriage and family. God convicted me to look at the many ways that I needed to change. How could I be a better helpmate? Edric’s strong supporter? A life-giver along side him? What did I have to stop doing and start doing?

I determined to do four things:

The first was I PRAYED for Edric and SURRENDERED him to the Lord. Instead of nagging Edric, I began to beseech God, presenting to him very specific requests about Edric, myself and our marriage. As I came before the Lord in dependence and brokenness, I experienced God’s peace, assurance, and security. The burden to change Edric was turned over to Jesus and I relaxed as a wife.

For the first time I began to understand what it meant to be a gentle and quiet spirit. It was resting in who God is amidst circumstances, amidst the urge to manipulate or control Edric, or fight for my rights as a wife. It was knowing that I was heard — my hurts, longings and desires — by the ONE who knew me best and loved me most.

Second, I FORGAVE Edric and chose to apply the principle of a CLEAN SLATE. If Jesus had died for me and forgiven me completely, who was I not to do the same for my husband?

The Bible tells us the God’s mercies are new every morning. Similarly, I needed to let go of the compounded hurt that kept stealing my joy. Instead of thinking, “he’s never going to change”, or “see he’s going to do the same thing again,” I said to myself each day is a new opportunity to love and forgive Edric.

Third, I asked Edric “HOW CAN I BE A BETTER WIFE? This is, of course, a dangerous question to ask! I discovered I had to improve a lot! I needed to speak in a more gentle way, I needed to do what he told me right away (as often as possible), I needed to prioritize his want for companionship, attention, service, and intimacy. So I humbled myself and asked for forgiveness for my disrespect and the things I had done to hurt him. I still have to do this when I repeat the same mistakes.

Fourth, I learned to BE A MORE AFFIRMING AND ENCOURAGING WIFE. Instead of telling him how he should lead spiritually, I affirmed his love for God and desire to follow him. Instead of second-guessing and challenging his decision-making, I expressed confidence in his leadership. Instead of wishing we had more money, I thanked him for working hard and trying his best to provide for our needs. Instead of focusing on what he was doing wrong, I tried to pay closer attention to instances when he made godly choices.

When I chose to be more positive, I realized what an amazing man I was and am married to. There were so many things that I didn’t see when I was focused on the negative aspects of his person (which were really minimal in light of all his great facets). When I was zoning in on his faults and criticizing them, I had tunnel vision for the bad that blackened out his wonderful traits.

Slowly but most certainly, Edric began to transform. It wasn’t overnight but God worked in his heart and made him a more selfless, patient, and Spirit-filled man. Today I see the old Edric less and less. If I had the beta version when we got married, God has upgraded him to version 10.0 x 10.0. God keeps on upgrading him!

For example, in the mornings I get my baby from her room and breastfeed her in ours. This is early in the morning. Sometimes, I get her at 5 or 5:30 am. Afterwards, she doesn’t go back to bed again. She is fully awake. In the past, Edric would have ordered me to bring her out so he can get more sleep. But he is the one who lovingly takes her and brings her downstairs to our househelp so I can rest. It’s a sweet gesture that demonstrates how different he has become. From expecting to be treated like a KING, he is willing to serve me and inconvenience himself for me.

A few weeks ago we were enjoying our date night when he asked me, “How can I improve and change as a husband?” I had to think long and hard and I replied, “Honestly, you have been great! I can’t really think of anything.”

Photos from that date night… 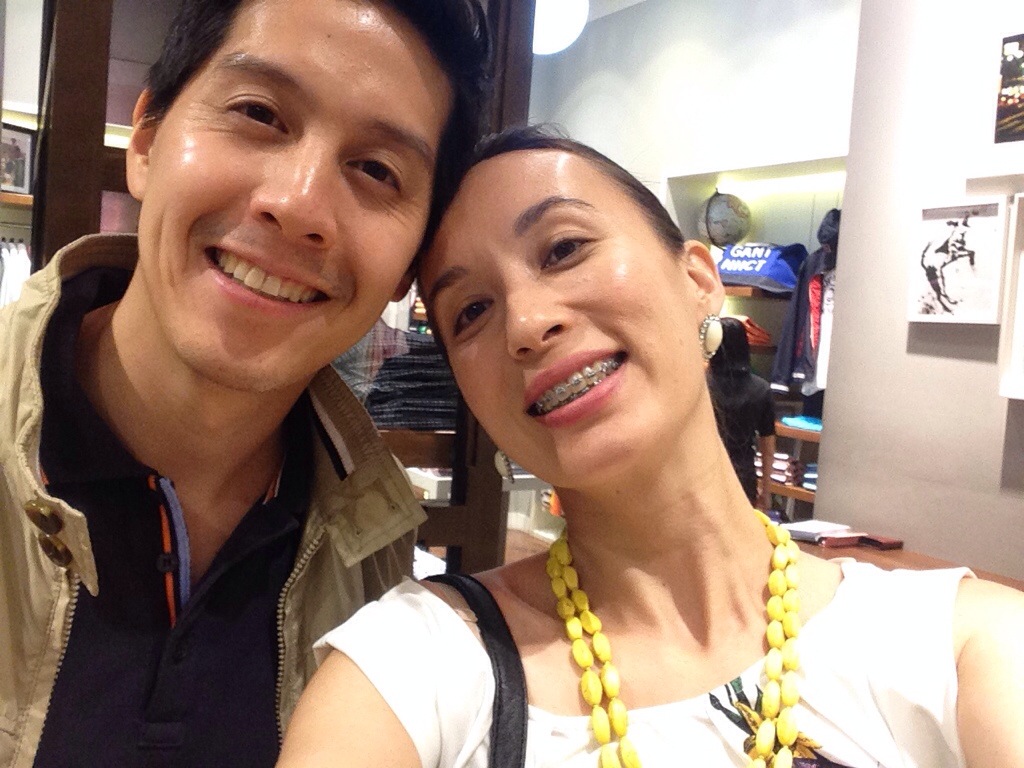 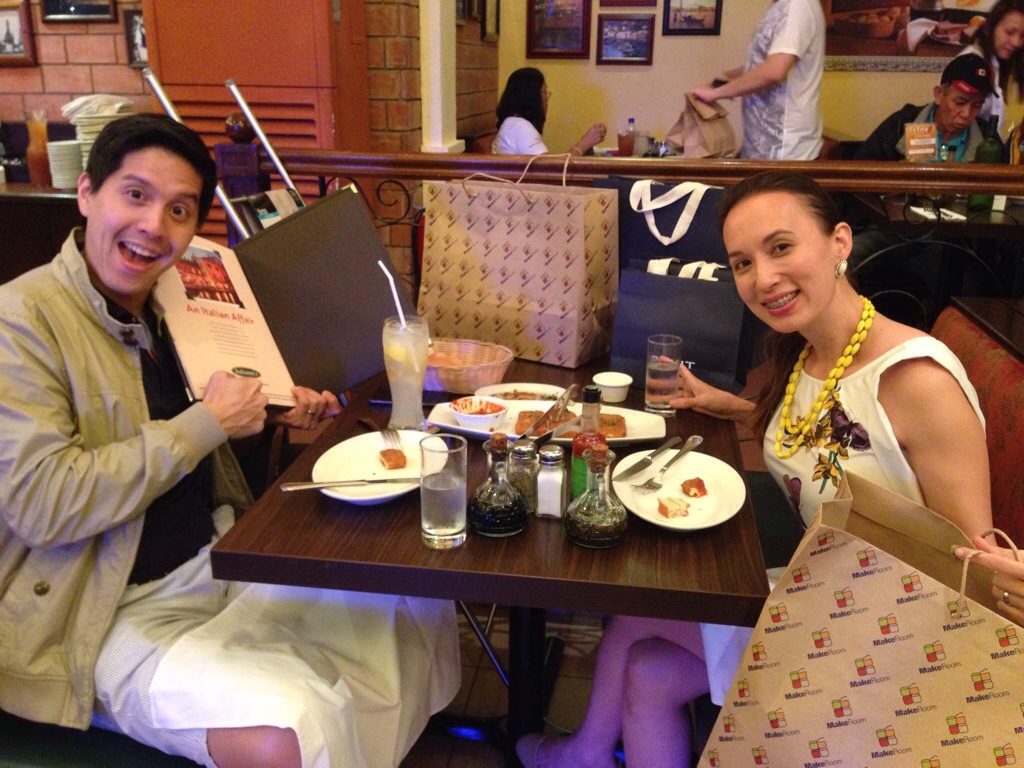 Years ago I would have jumped at the opportunity to bullet point all the ways I wanted him to change. But by God’s grace he is a transformed person because of Christ’s continued work in his life. He is truly a godly leader, a loving and understanding husband, and a good provider. He is a man that I admire and respect with all my heart.

While I still struggle with respect and Edric still struggles with impatience from time to time, the secret to victory, romance and joy in our marriage is keeping Christ at the center of our relationship. When the motivation to keep improving wanes or when we are tempted to return to the selfish version of our Christ-less selves, Jesus becomes our superseding why, compelling us to press on in obedience and hopeful expectation.

I have been crucified with Christ; and it is no longer I who live, but Christ lives in me; and the life which I now live in the flesh I live by faith in the Son of God, who loved me and gave Himself up for me. (‭Galatians‬ ‭2‬:‭20‬ NASB)

Serving together at the CCF Couples Retreat in Baguio. I love this man! 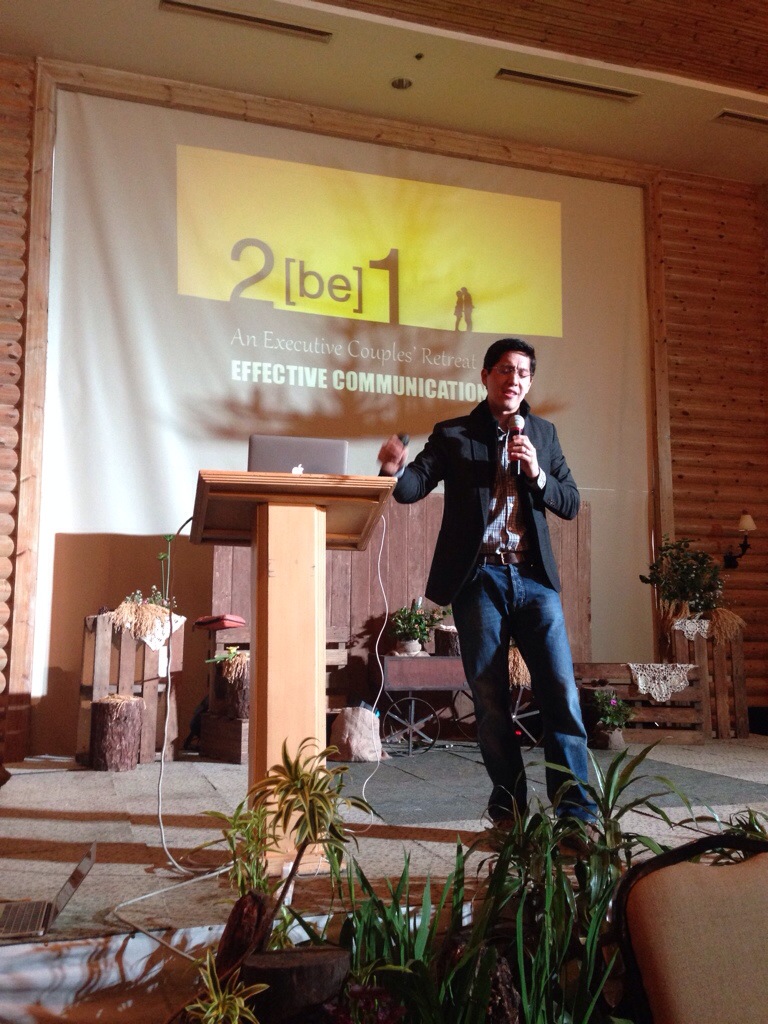