Almost everyday, I watch the early morning news on the aftermath of Hurricane Haiyan (Yolanda to us). In fact, I feel guilty as I sit there with my healthy baby, Catalina, kicking in her bouncer and cooing. Seated in a comfortable chair in a house with electricity, a comfortable bed, food and clean water seems excessive at a time when so many have lost everything.

Initially, the apocalyptic images were unsettling. But far grievous to me have been the personal stories of loss.

It is spiritually and emotionally troubling to hear about tragedies that resonate with my heart as a mother, as a parent. I was told of a mother and father who lost their 1 month old baby, their first child…a man who was found dead with his arms around his four year old son…a mom who is still waiting to hear from her husband and two children who lived by the shore-line while she was working in Manila…babies who have no milk because their mothers were killed.

Yesterday, I kept tearing as I went up and down the aisles of the grocery, shopping for the children of a lady who works for us – Catalina’s yaya. Her children have no access to food but she was too embarrassed to ask me for help until she was really desperate. When I asked her if she was okay, she started to cry. Shopping for her family was such an emotional event for me. I kept thinking about how diligently she had been taking care of Catalina while she feared for the well-being of her own children!

I was also heartbroken last Sunday, while singing songs during worship about the faithfulness of God. I kept thinking about the people who have been affected by the storm. Plagued by images of their horrifying circumstances, I was distracted as the congregation went through song after song.

I don’t doubt that God is faithful but I know it is one thing to stand in an air-conditioned church auditorium singing worship songs and another thing to be praising God when you are in the eye of a storm like Typhoon Haiyan. And what about afterwards, while assaulted by the stench of decomposing bodies, overcome by desperate thirst and hunger, and confronted with the reality that you no longer have a home to go back to or the resources to rebuild it?

In the most timely manner, however, last Sunday’s message given by Dr. Harold Sala ministered to me. He said, “When people asked, where was God during the storm?” his answer was, “The same place He was when His son was crucified.” It hurt God to watch his own son pay for the sins of the world but he stood aside and let it happen.

This was comforting because on the one hand, God is not far removed from our tragedies. He is not a distant spectator or unconcerned about the details of our pain. He is present. But it is sobering to consider that on the other hand, he may sometimes stand aside and allow suffering to crystalize the truth about sin. There are consequences to sin. He is so intolerant of it that he let Jesus, his only son, die to save us from it.

Death and destruction were never his original plan for mankind but he permits them to exist. So how do we reconcile what is true about God as loving and what happened 11 days ago when the most powerful storm to make landfall ravaged us? 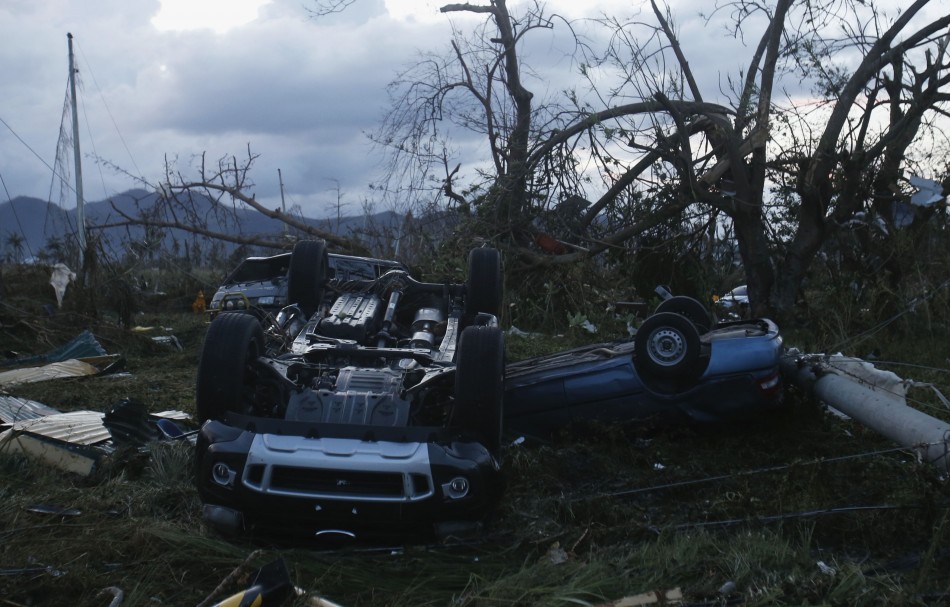 It’s worth pondering these passages in Deuteronomy, “Now this is the commandment, the statutes and the judgments which the Lord your God has commanded me to teach you, that you might do them in the land where you are going over to possess it, so that you and your son and your grandson might fear the Lord your God, to keep all His statutes and His commandments which I command you, all the days of your life, and that your days may be prolonged. O Israel, you should listen and be careful to do it, that it may be well with you and that you may multiply greatly, just as the Lord, the God of your fathers, has promised you, in a land flowing with milk and honey.” (Deuteronomy 6:1-3)

People may not agree with me but I believe our actions must be called into account for the curses that befall us. Could we have been accomplices to a murder of mass scale? Have we not abused the environment we were created to care for, ignored the poverty-stricken, celebrated immorality, sold innocent children to sexual predators, committed idolatry by worshipping materialism and success, cheated one another, and stolen from those whom we are supposed to serve under the pretense of good governance? And even after a storm pulverized our landscape there were those of us who pillaged and raped the fallen!

God has not abandoned us, but we have, in many ways, abandoned him – his Word, his principles, his prescriptions for an abundant and blessed life. So when there are consequences to our choices, we cannot say that he is not loving or absent for allowing us to reap what we have sown.

God has not moved. His offer of salvation through His son, Jesus Christ, still stands. His arms are ever open to receive those who repent and want to have a personal relationship with him. And his promises remain the same to those who believe in him — especially the promise of everlasting life with Him.

Tragedy causes an uncomfortable stirring in our souls that makes us more conscious of spiritual realities. Senseless dying and mass devastation are not pleasing to God. But if these things cause us to turn away from sin and run towards him, then they accomplish a salvific purpose, in the eternal sense of the word. We can trouble ourselves with the thought that it isn’t fair when innocent and good people have to perish. What of the thousands whose lives were taken away by the shoreline of Tacloban? I would like to hope that they had a moment to give their lives to Christ like the thief on the cross to whom Jesus said, today you will be with me in paradise. God’s grace is beyond our scope of understanding so who is to say where they are now.

But for those of us who live on, we must consider the consequence of eternity in hell as infinitely worse than the effects of a super typhoon. Hell is the one place where you cannot say to a tormented soul, “It’s going to get better.”

Perhaps this storm ought to be taken as a much-needed wake-up call, a kind of divine sideswipe to get our attention. We need to reflect on what course we are on as a nation. Are we becoming more Christ-like as a people? Is God really the center? Are we living in accordance with his word? What values are becoming commonplace in our homes and do they glorify him? 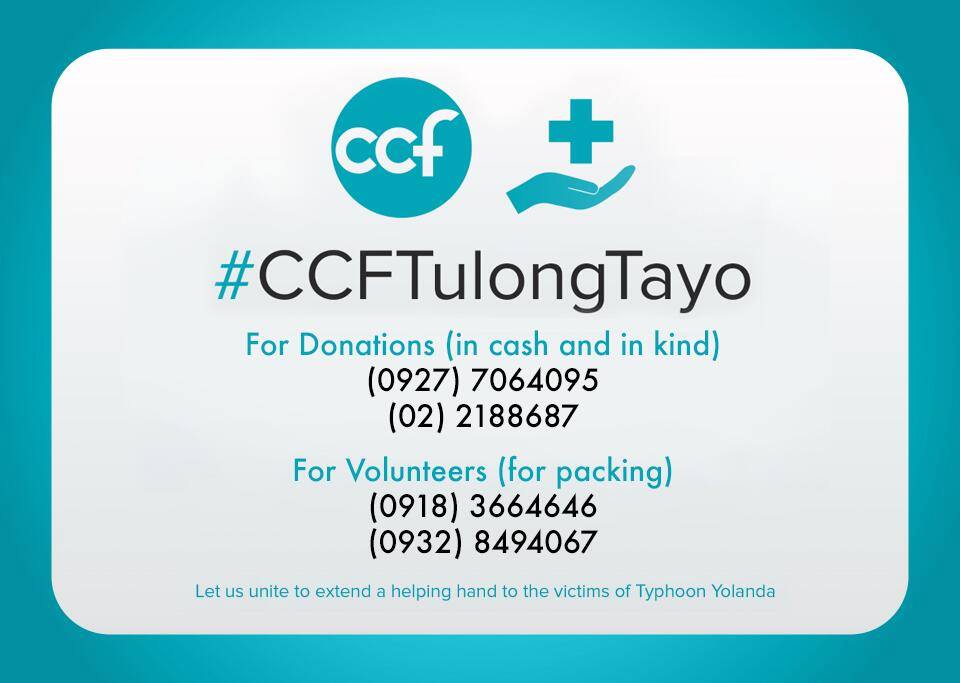 Packing relief goods and organizing relief operations are important to meet present physical needs but we need a cure that is beyond the basic necessities of food, clothing, and shelter. We need Jesus Christ to heal our nation. He cannot merely be a cultural figurehead or a symbol of religion to us. We must receive him as Lord and Savior. His life, death, and resurrection warrant nothing less.

When I think of the fury of a 600 KM-wide tropical storm pulverizing an area like Tacloban, I cannot imagine the wrath God poured out upon Christ at the cross because of our sin, and I dread to think of what his wrath will be like at judgment.

The real threat to our nation is not the superstorms that may come again, but the state of our inner, spiritual lives and the effect they have on our country. Do we have God’s favor because we are committed to righteousness and holiness? Or, are we inviting trouble by making sinful choices?

Everyone around the globe wants to help us move past this disaster so we can restore what once was. But it would be a greater tragedy if each of us did not look into the depths of our hearts and ask, “Is Jesus Lord and Savior of my life?” If he is then I need not fear the trials to come or lose hope during the trial I am in. But if he isn’t, I have no real security and I hazard everything, especially my eternity. 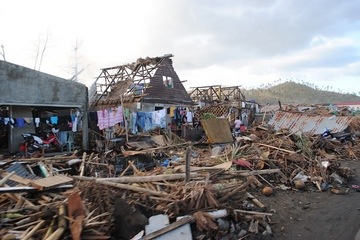 These things I have spoken to you, so that in Me you may have peace. In the world you have tribulation, but take courage; I have overcome the world.” (John 16:33 NASB)

9 thoughts on “The Greater Tragedy”