Our home has been more quiet than usual since the ENT banned Edric from speaking for a week. He has nodules in his larynx that may require surgery if he doesn’t rest his voice completely. So he writes the kids and I notes or communicates through sign language. Thankfully, he is a man of many talents and knows how to sign the alphabet. Consequently, I have been forced to learn it as well. I am still very slow.

It’s strange to be married to such a silent husband. Between the two of us, Edric is the talker. Meals are always more exciting when he is present because he engages everyone and likes to joke around with the kids and me. We usually spend our evenings chatting about his day and telling each other the highlights and lowlights.

Now, I must avoid overwhelming him with questions that require him to answer through tedious writing. So our relationship has been about being together physically and paying attention to each other’s body languages, as well as appreciating shared stillness.
His forced silence has also been such a great example of what it means to control the tongue. On Saturday when the movers destroyed part of the piano we had delivered to our home and chipped the new tiles we had installed last week, I knew that Edric was fuming inside. Yet, he couldn’t vocalize his anger. I mean, he could have, technically speaking, used his voice but he chose not to. His eyes did enlarge to twice their size and he breathed in very heavily to control himself. I thought he might combust from the internal pressure of so much restraint!

Amazingly, his frustration subsided which allowed me to keep my cool, too. Needless to say I was so upset at the movers’ horrible service because their damages will be costly. Beyond this, I found it incredulous that they had nothing to say for themselves and didn’t think it a big deal that they were so unprofessional in their handling of the piano, besides chipping our tiles. When I eventually explained to them how disappointed I was at their service they did apologize but they were obviously in no position to remedy their mistake as hired hands. Thankfully, we have a wonderful friend, Architect Michael Doria, who is helping us do renovation works and he will send his guys to fix the tiles again.

Yet another incident happened this evening to annoy Edric but he kept quiet. Our neighbor’s guest blocked the road with their cars thereby preventing us from getting home. Edric was tired from a two hour drive but he couldn’t voice out his frustration as we waited for at least ten minutes for the vehicle to be moved out of the way.

Normally, Edric would have lots to say about the two incidences that I just shared. He would have spoken his mind with liberality and included heightened emotion in his tone. However, the need to preserve his vocal chords triumphed his desire to express irritation.

I find his unusual situation to be a fitting illustration for how we should all guard our tongues. If we internalize how important it is to preserve our testimony and honor God with the words we speak, then I am sure we wouldn’t be so careless about the things we say.

The book of James expounds on the difficulty of controlling our speech and I can completely relate to this because I often err with my tongue.

“Indeed, we all make many mistakes. For if we could control our tongues, we would be perfect and could also control ourselves in every other way…And among all the parts of the body, the tongue is a flame of fire. It is a whole world of wickedness, corrupting your entire body. It can set your whole life on fire, for it is set on fire by hell itself. People can tame all kinds of animals, birds, reptiles, and fish, but no one can tame the tongue. It is restless and evil, full of deadly poison. Sometimes it praises our Lord and Father, and sometimes it curses those who have been made in the image of God. And so blessing and cursing come pouring out of the same mouth. Surely, my brothers and sisters, this is not right!” James‬ ‭3:2, 6-10‬ ‭NLT‬‬

Here’s are three insights I have gotten from Edric’s speaking haitus:

1. Even though taming the tongue is so difficult Edric’s self-control tells me it is possible to guard the tongue when the motivation is strong enough. The question is what should our motivation(s) be?

Personally, the motivation is two-fold. God has redeemed my tongue for his glory, to be used as a blessing, to praise Him, to declare His gospel message, and not to hurt, curse, slander, or injure others.

“Let the words of my mouth, and the meditation of my heart, be acceptable in thy sight, O Lord, my strength.” (Psalm 19:14)

Secondly, I fear God and I am accountable to him for the words I speak.

This verse always comes to mind when I speak ill about someone. It deeply convicts me because I know that I will be held accountable. Someday, everything that I thought was whispered in private will be announced and brought to light.

When I was in high school I remember talking about someone behind her back and she was actually behind my back, sitting on a seat just inches away from me!  I was mortified! Had I realized that the person was there I wouldn’t have spoken the words I did.

Well, since I know that God hears everything I say in public and private then shouldn’t that make me extremely cautious about speaking negatively about anyone, even if he or she isn’t around?

2. Since signing and writing are much slower for Edric, and acting to communicate take so much more energy, he evaluates what is worth saying and not saying. Similarly, if I just took a thoughtful pause before I let words out of my mouth, especially when they have to do with another person or in reaction to a person, I bet I would avoid a lot of inappropriate and un-Christlike statements.

Often, it is the unbridled tongue that lights a fire. Whenever Edric thinks I am crossing the line by divulging too much information or complaining about something or someone, he looks over at me and chimes, “Loose lips sink ships.” Or, he simply warns, “Hon, be careful.” Then I get the picture and stop myself.

“Those who guard their mouths and their tongues keep themselves from calamity.” (Proverbs 21:23)

The passage talks about guarding our mouths which means that our tongues have criminal potential! It’s one of those body parts that can quickly go out of control if we aren’t checking on it regularly. Before letting it lose, we need to ask ourselves, “Do I have any junk in my heart that’s going to come out in an ugly way when I speak?”

Heart junk is stuff like anger, bitterness, insecurity, fear, anxiety, and the like, which we need to deal with and speak to the Lord about first before speaking to others.

3. Edric can’t even whisper. It’s actually worse than speaking. Since he cannot vocalize any sort of sound, there is no agitated tone coming out of his mouth at any moment of the day. I am so sensitive to tone and this is an area where we have conflict. When his tone is abrasive I get hurt easily. For the past few days, however, I have heard no such tone! Our marriage has been very peaceful!

It just got me thinking about how big a difference tone makes when we are communicating with one another. Guarding our tongues isn’t just about the words we speak or don’t speak. It’s also about how we say what we say.

The secret to guarding our tongues is of course spiritual in nature and not a vocal chord injury. It’s being filled with the Holy Spirit. When we are controlled by the Spirit then we can “speak to one another in psalms and hymns and spiritual songs, singing and making melody with your heart to the Lord; always giving thanks for all things in the name of our Lord Jesus Christ to God, even the Father.” (‭Ephesians‬ ‭5:19-20‬)

I miss having conversations with Edric and we have a few more days to go before they stick a strobe into his throat to check his larynx. Lord willing, the nodules will shrink and nothing alarming will be found. In the meantime, I have to stay by his side as much as possible everywhere we go in order to translate for him and be his mouth piece.

As much as I enjoy his sweet messages through his phone or the way he signs statements like, “I love you,” and as much as I appreciate the insights that his silence is teaching me, I can’t wait to hear his voice again! I don’t think I can get used to a speechless husband! 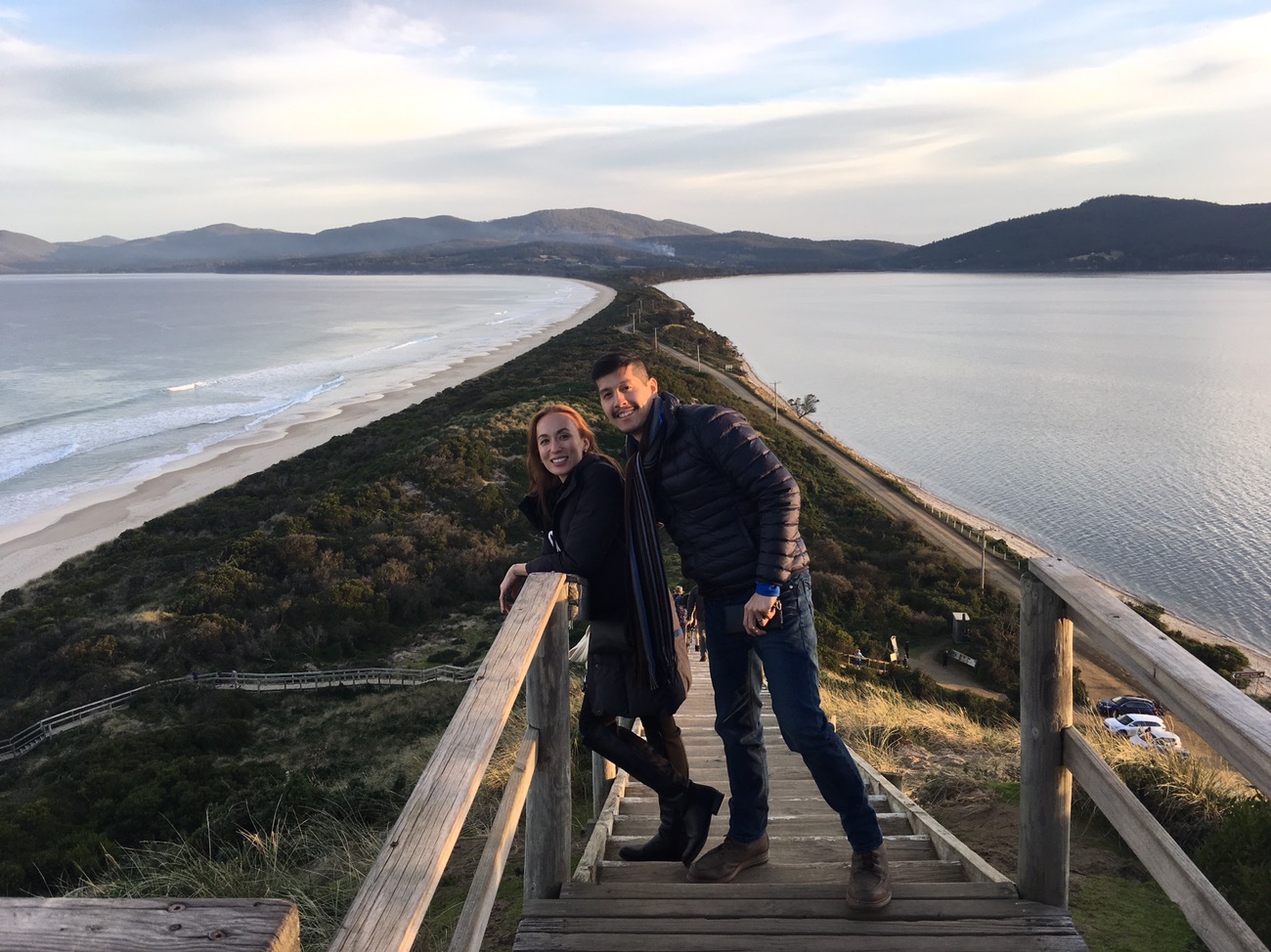